The battery will be replaced as it has been five years since we purchased it and the cell is no longer turning when the engine starts.

My Lancer Evo 2015 model is loaded with a Panasonic battery, size S65D26L.

Trying to buy the same one as this one is terribly expensive, and it makes me feel dark to think that I would pay this price for just a car battery.The FREED battery costs about 3000yen, but this difference is too big. 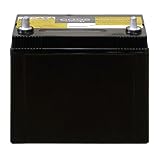 ACDelco batteries are cheap and recommended.

After some research, I found out that I could use the ACDelco SMF75D23L, which was once used as the genuine battery for the Lancer Evo 10, or the larger SMF80D26L, so I bought the reasonably priced SMF75D23L.

The main advantage of ACDelco is the price. You can buy it for less than half the price of a Panasonic one. 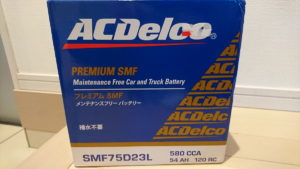 The performance guarantee of the battery is 3 years and 40,000 km, which is inferior to Panasonic’s 3 years and 80,000 km, but it is not a problem because of its overwhelming cost performance, even if I replace it one more time, ACDelco is still cheaper. 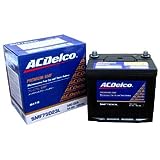 The first step is to remove the inner lining of the trunk. 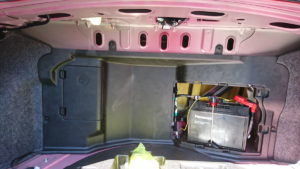 There are four push rivets attached to the partition on the body side, so use the interior removal tool to insert it into the gap between the rivets and lift it off.
内張を外すとバッテリー交換作業ができるようになります。 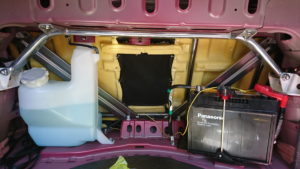 This time, I changed the battery from Panasonic to ACDelco, so the hose for venting does not stick as it is.

But the great thing about our Mitsubishi is that they have a part in the car to replace the ACDelco battery.
Here it is. 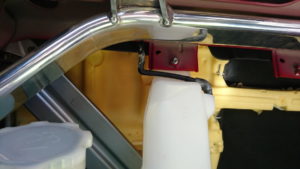 There is a rubber tube connected to the top of the washer tank, and an elbow for ACDelco is attached to the end of the tube. You can remove this and replace it with the elbow on the current vent pipe. 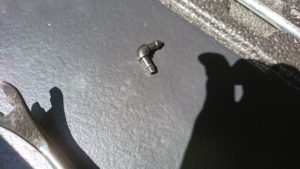 Another important task is that the ACDelco battery has two places to connect the gas vent, so we need to plug one of the unused holes.
I used curing tape to double-fasten the gas vent hole on the positive side, vertically and horizontally, like this. 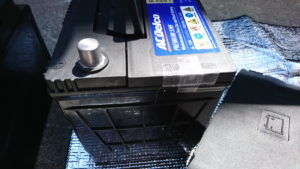 The next step is to replace the main battery, which weighs 17 kg.
One thing to note is that if you align the Panasonic and ACDelco batteries in a direction where you can read the letters, the position of the positive terminal will be reversed, so you need to be careful not to connect the positive and negative terminals by mistake. 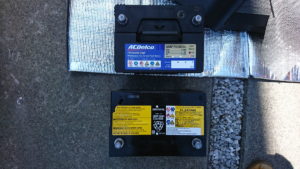 The ACDelco battery has a handle so it’s easy to lift, but the Panasonic does not, so you have to be careful when lifting it.

This is what it looks like after the battery is replaced. 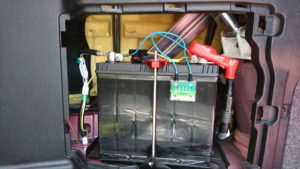 It is originally designed for Panasonic batteries, but I installed a LifeWink compatible battery. I’m sure it will work fine, but I’ll check in the future.

I replaced the battery with an inexpensive ACDelco battery instead of buying an expensive Panasonic battery. After replacing the battery, the cell rotation when starting the engine is lighter and better.

The LifeWink will make it easier to know when to replace the battery next time. The battery for the Lancer Evo is very expensive, so it is very important to install it. 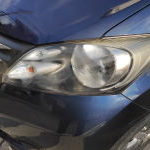 Fixing foggy headlights with Hall Zero without removing the coating.
I added a set of fins to reduce wind noise as a noise reduction measure.
I put RECARO stickers on the seat rails.

I put a RECARO sticker on the side adapter part of the seat rail. Buy Recaro logo stickers. I had a sticker of the R...

I added a set of fins to reduce wind noise as a noise reduction measure.

I put on a set of fins to reduce wind noise, which I've been curious about for a while. The product I bought is not the...

To solve the poor interior, which is one of the few drawbacks of the Lancer Evo, I put a carbon-style sticker on the are...